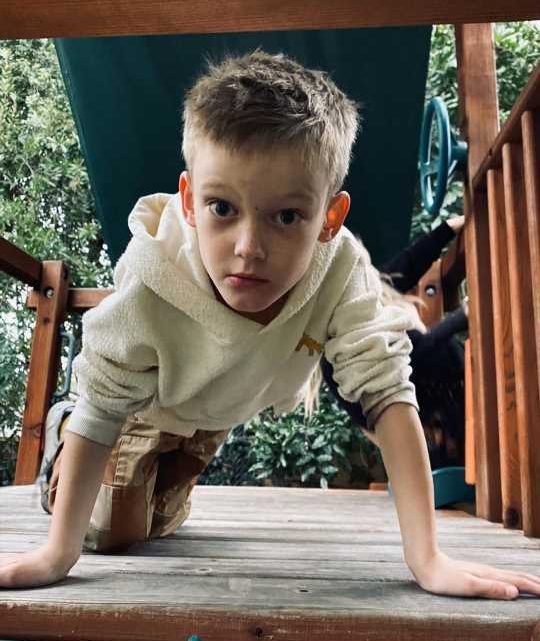 Matthew Koma is proud to call Luca Cruz part of his family.

The 32-year-old musician shared a birthday tribute to Luca, his wife Hilary Duff‘s son, on Instagram Friday, marking the little boy’s eighth trip around the sun with a heartfelt message of pride and gratitude.

“It’s this little dude’s 8th birthday today and I couldn’t be more proud + honored to watch him become the little man, son, brother and role model he is,” Koma began his lengthy caption, which featured photos of Luca solo, with his mom and stepfather and alongside 16-month-old little sister Banks Violet.

“Some of the perspective this kid brings into our world is actually mind blowing. We have each other’s backs so hard and I’ve learned more from him than he’ll ever realize,” Koma continued, going on to thank Luca “for letting me walk you into school, for walking me down the aisle, reigniting the kid in me, singing my songs with me, looking out for my dairy allergy, teaching me every good iPad game, watching Frozen with your sister every morning, letting mom think you break things when I really do, and for just simply being you.”

“We’ll always, always be the ‘sweet team,’ ” he added, concluding, “Can’t wait for you to read this in 15 years when you’re allowed to have an Instagram.”

Koma’s touching words for his stepson came hours after he and Duff, 32, joined forces with Luca in the kitchen to whip up his birthday cake.

Luca appeared to enjoy the quality time with his mom as they scoped out the ingredients and baked the celebratory confection together in snapshots featured on the Younger actress’s Instagram Story.

“Bday Cake makin going down,” Duff wrote on a photo of Luca stirring his cake batter with a red electric mixer while she Koma supervised his work.

The latter also offered a glimpse into the cooking session on his own Instagram Story, writing, “Making this dude’s bday cake,” over a sweet photo of the mother-son duo smiling for the camera, surrounded by the cake ingredients.

Duff shares Banks with husband Koma, whom she married this past December, and Luca with ex-husband Mike Comrie, whom she wed in 2010 and finalized her divorced from in 2016.

A source previously told PEOPLE of her at-home sunset wedding to Koma, “It was small and low-key. Only family and close friends.”

Over the weekend, the singer and actress spotted a tabloid headline that her and Koma’s marriage is “on the rocks already” less than three months after their wedding — and she couldn’t help but have some fun with it.

“Apearantly [sic] matt and I are having trouble,” she captioned a video of the magazine on her Instagram Story Saturday, jokingly adding, “He hasn’t told me yet … “