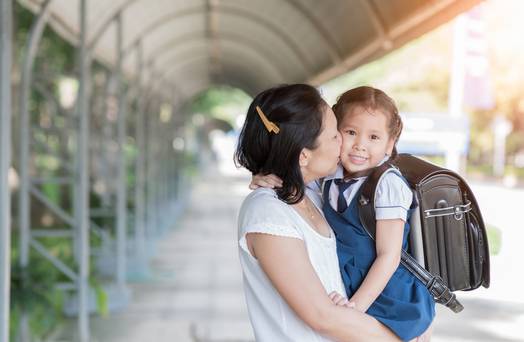 ‘Do you know if they need an actual fountain pen – or will this one that writes like one, do?” asked the man next to me in Tesco.

People rarely ask me anything in supermarkets, I have the air of a bewildered mistake about me as I wander among the shelves. But when you recognise a fellow lost soul in the stationery aisle, you know these are not normal times.

This is “Back to School” and despite them advertising its imminent arrival since the week after school broke up, there are still people like me and this man, clutching shopping baskets full of compasses and pencil sharpeners at 11 o’clock on a Sunday night in the last week of August, gripped with fear at our own inability to be adult let alone parent.

I worked out a few days ago that this is my 15th year of steering a child through the school doors. I don’t even want to think about the fact that I still have eight to go.

But that plus the years spent dragging myself in, like a sulky Harry Potter to face various nuns and teachers, means the back-to-school ritual has punctuated my life in a very definite way, as much as New Year’s Eve or another birthday.

I have cried on two of them. My own first day in junior infants, where I clung to my mother’s leg and refused to be prised off by a determined nun until she produced the plasticine she was promising me would be mine for the squishing. And that of my eldest’s.

So much importance and significance had I ascribed to his first day of ‘big school’ that when I dropped him off and he never looked out the window at me to wave goodbye – I walked out of the playground a broken woman.

You can tell the difference between first-time back-to-school parents and those who have done it before. The first-timers are white-knuckled with stress in their attempts to get their indifferent infant to engage with the Stickle Bricks and make best friends immediately with the dubious looking child beside them.

Parents for whom this isn’t their first rodeo have the massive advantage of mostly concentrating on texting their pals, to find out where they are going for coffee after the drop-off as they’ve said they’d be late into work – what with it being the first day back to school and all.

But for all of them there is a certain relief that the day has finally come. That the build-up is over and one way or another they have managed to get their child into a clean(ish) uniform, with a bag of mostly the correct stuff, through the doors of their classroom on the correct day at the correct time.

This is no small feat. Especially for those of us for whom organisation is not a natural trait.

It is, of course, possible to do too little. Neglect of children is a terrible thing. But what is much more common is parents trying to do almost everything for their very capable kids possibly because now that’s what’s expected of them – but think on! That isn’t exactly empowering for the kids.

The irony is that back when most of us were raised with one stay-at-home parent – usually our mum – we were expected to get on with a lot of stuff ourselves, including homework, minding our own things, getting to and from school, etc.

And now that in many households both parents work outside the home there is more pressure than ever on those same parents to supervise homework, ferry their kids places and know exactly where they left their football boots after training last Tuesday even though last Tuesday you were in meetings all day with your boss about your company’s hostile merger.

If I have learnt anything about parenting – and let’s face it I probably haven’t – it’s that less is perversely more.

The less I stress about it, the more I enjoy it and weirdly the happier my kids appear to be. I did worry hugely on number one son. I was almost positive I was going to mess up and mess up badly.

The line from the Philip Larkin poem, ‘They fuck you up, your mum and dad’, felt like a given as far as I was concerned. But truth be told in the manner of cookery programmes, where they shove cakes into the oven and then pull a fully iced one out from under the counter with a “Here’s one I prepared earlier” flourish; I look at that eldest child now – who really as far as I’m concerned couldn’t have turned out any better – and I take great heart. Because if someone like me can raise a well-rounded, likeable, decent human being, well then pretty much anyone can.

We worry ourselves sick that they – because of something we do or don’t do – will somehow be affected adversely. But the truth is most kids turn out just fine and most of that worry was for nothing.

The benefit of having hundreds of children like I do, that range in age from university going down to primary school is that I can see over the years how my own parenting became lighter touch; became less infused with stress about getting it right.

I could have gone so much easier both on myself and indeed on my older kids when they were small and everything would have still been A-OK.

So despite the obvious huge expense, the inordinate length of the to-do list and the associated stress that goes with all of it, I say to you now, what I said to the man in the stationery aisle in Tesco when he asked about the fountain pen.

“Look I’m really not too sure either but to be honest I think it’ll be grand.”