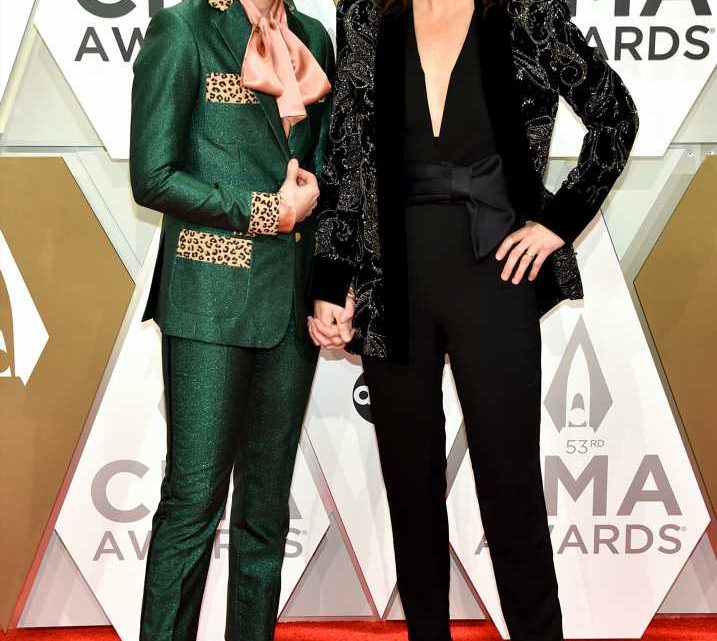 Brandi Carlile is getting candid about what it means to be a parent who is a part of the LGBTQ+ community.

In her new memoir Broken Horses (out now), the singer-songwriter, 39, opens up about raising her two daughters Evangeline, 6, and Elijah, 3, with her wife of nearly 9 years, Catherine Shepherd — and how they had to trail-blaze a new path.

"I'm hoping people see through my story that there's no right or wrong way to evolve into a parenting role in either heterosexual or same-sex relationships," Carlile tells PEOPLE in this week's issue, on newsstands Friday. "There are different, complicated dynamics, and there are many ways to feel. The more we talk about it and normalize it, the easier it is to understand that your parenting journey is custom. It really is your own."

Carlile first met Shepherd, who coordinated Paul McCartney's charity work for 10 years, when she reached out in 2009 about donating some of the Beatles' memorabilia to Carlile's Fight the Fear campaign, which provided self-defense and empowerment training for women at risk for violence and abuse.

Since Shepherd was in the U.K. and Carlile was in the U.S., they spoke with each other over the phone for a year. When Carlile finally met Shepherd in person at one of her shows in New York City, she was nothing like she expected.

"It was shocking to say the least," Carlile says. "Every time I talked to her over the phone, I thought I was talking to somebody who was like 65 years old. I don't know why. I think because of her wisdom and her demeanor. Or maybe I thought she was Paul's age or something. So we met backstage in New York, and we were both like 27." From there, Carlile and Shepherd's friendship grew, and they eventually started dating. After they got married in 2012 (with three wedding ceremonies), they knew they wanted kids right away.

To conceive their first daughter, Evangeline, the couple used IVF, harvesting Carlile's eggs for Shepherd to carry since it'd be hard for Carlile to be pregnant while working and touring. Though she initially "struggled" with the fact that she wasn't the one to carry Evangeline, Carlile — who writes in Broken Horses that she was "feeling really confused about what my role even was" — eventually "made peace with not being pregnant."

"I made peace with knowing that there was some pioneering involved in what we were doing, to the point where there wasn't even a two mother template on a birth certificate yet," she says. "There is now, but psychologically, all these things are really hard. And the high dive into parenting is a complicated leap to take anyway."

To this day, Carlile — who, inspired by Ellen DeGeneres, came out at 15 — is "struck by how impactful representation" has been to her throughout her life.

"If you take Elton John and the Indigo Girls and the Philadelphia soundtrack and Ellen DeGeneres out of my adolescence, where would I even be?" she says. "I came out of the closet before I'd ever even met a gay person in real life. I hadn't had anything close to a girlfriend, but I knew because I had representation in the larger culture."

When Carlile and Shepherd conceived their daughter Elijah by artificial insemination in 2017, the singer felt much more confident in her role as a parent despite not being the one to carry again. (Carlile's childhood friend, David, whom she affectionately refers to as "baby daddy David," donated the sperm for both children.)

Though welcoming No. 2 was easier for Carlile, she admits now that she's in a constant state of worry because her girls are getting older.

"I hesitate to say things like, 'We all worry all the time — that's what moms do,' " she says. "Because some moms are like, 'Oh, am I sh—y because I don't worry?' But no, I worry all the time that I'm doing it wrong or that I'm depriving them of something or that they're getting too much or that they won't have the life skills that I have because they're not poor or because they've only ever lived in one house or because they don't understand that things are hard in the world. We don't know how to tell them that yet."

Though the past year has been difficult amid the COVID-19 pandemic, Carlile — who kicked off her Broken Horses virtual book tour on Tuesday — says the silver lining has been the extra time she's gotten to spend with her family.

"It's been the longest stretch I've had without performing live music since I was like 8," she says. "It's made me really tight with my family in ways that I didn't even think would be possible. But at the same time, I've also been really missing my job and doing what I was born to do."

Through this past year, Carlile and her family have kept busy fishing and camping near the Canadian border.

"We bought a fishing boat that we can sleep on," she says. "It's an aluminum fishing boat and we'll go out and fish and catch Dungeness crab and grill on our boat, then spend the night out there. My job has kept me on the road in the summers for the last 20 years, so it's been good to make up for lost time."

For all the details on Brandi Carlile's struggles, pick up the latest issue of PEOPLE, on newsstands everywhere Friday.