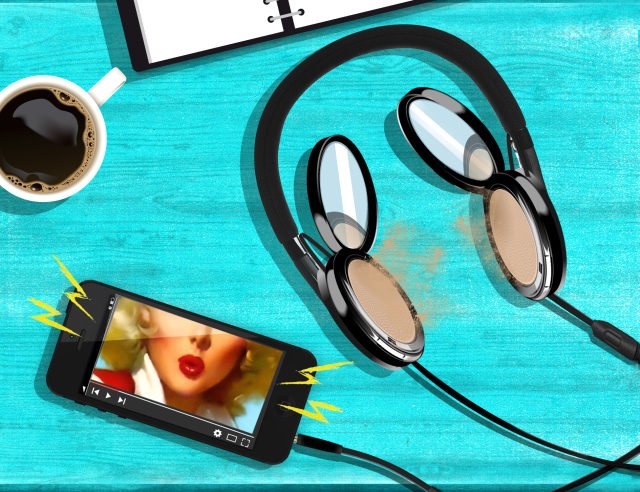 Music streaming platforms are helping beauty find its voice.
As the advertising landscape continues to evolve and beauty brands ramp up their digital efforts, some are finding it easier to cut through an increasingly saturated social-media space via sound.
"We’re in an interesting time period where, beyond distribution, streaming intelligence offers much more insight into what is beauty and what is culture and what is influence," said Rob Walker, creative director of creative solutions at Spotify. "'What is the sound of beauty' is a conversation we’ve been having with beauty brands. As we move into a voice-based, screen-less society, what is that sound for brands and how do you start to lean into that?"
Tamara Bedrosian, vice president of CPG and retail at Pandora, echoed the idea of a shift away from screens toward sound.
"Consumers are not spending hours sitting around the TV or reading a magazine, but music is with them throughout the day," she said. "We have the ability to deliver that message into the moment where they’re actually shampooing their hair in the shower or they’re putting on their mascara, getting ready to go out for the night. That has led to this interest in audio and consuming and creating content ."
Beauty investment in print advertising dropped 23 percent between 2013 and 2017, according to Launchmetrics, leaving social media as the industry's dominant channel.
Ulta, Dior and Clinique are just a few of the beauty brands that advertise on Spotify — Ulta also advertises on Pandora — and during an interview on Ralph Lauren's Polo Red Rush fragrance launch, Ginny Wright, global deputy general manager of Ralph Lauren Fragrances, expressed interest in partnering with music festivals and platforms such as Spotify. Spotify also previously sold Pat McGrath Labs products via the Spotify shop attached to artist Maggie Lindemann's page.
To date, Spotify has 180 million total monthly active users. Pandora has 71 million monthly active users. Tidal has 3 million subscribers.
Streaming apps provide additional modes of advertisement and e-commerce for beauty brands. More than that, they're now offering their resources — and audiences — for creative content partnerships.

In April, Spotify debuted Bag Check, a branded video partnership with Sephora timed with the kickoff of festival season. The 30-second Coachella-sponsored video featured artist Moonz creating a festival-ready look using products by Too Faced and Hush. The video lives on Spotify's platform and Sephora's YouTube channel.
"Brands want to sponsor specific moments in time and those moments in time could be anything from a cultural moment to a specific moment that you can only tailor to Spotify, which is like a getting-ready playlist or a shower playlist or a team-hangout playlist," said Walker.
In May, Tidal debuted "Get the Look," a nine-part video series for which popular beauty YouTubers Jackie Aina, Rosa Chang-Crespo and Nathalie Muñoz recreated looks worn by artists such as Janelle Monáe, Nicki Minaj and Cardi B. The videos are exclusive to Tidal and were created by the YouTubers.
"With Tidal, we’re all about not just music, but the culture of music and everything that surrounds a musician’s life," said Tony Gervino, Tidal's vice president of culture and content. "With social media, there’s a thirst for knowledge about every part of lives. It seemed like a natural that people would love to know how Nicki Minaj got the look for video because there’s a creativity and an artistry to it. Tidal members were asking for that kind of access."
Chang-Crespo, who was paid by Tidal for the three videos she created for the series, said she hadn't noticed a sizable boost in her following due in part to Tidal's lack of reposting on Instagram.
"They did repost on Twitter, all three of us," she said. "The beauty community does use Twitter, but it’s kind of dying out with all the controversies and all the drama. Instagram’s the main platform and if they had reposted it, I would have gotten more buzz from it."
She did, however, notice an increase in engagement from her followers. "My subscribers engaged more because they were happy for me," she said.
While Spotify and Tidal are putting an increased focus on video, Pandora is hoping to own the audio space, which includes both music and spoken word podcasts. According to Bedrosian, the platform has been working with an Oakland, Calif.-based audio labs team to bring colors and visuals to life through audio, and has partnered with neuro-marketing company Neuro-Insight to "prove the memorability of audio ads" Pandora serves.
"We found that audio ads served within a Pandora environment were 27 percent more effective than print ads and 25 percent more effective than TV norms," said Bedrosian, citing a study conducted in partnership with Neuro-Insight. She attributed Pandora's growth in beauty to the notion that audio leaves more room for the consumer's imagination when it comes to beauty ads.
"I’m a brunette, right? If I look at an ad and I see a gorgeous blonde model with long, flowing blonde hair, I don’t relate to it," she said. "However, if that same ad was portrayed to me through audio, I very quickly can envision myself because I’m not seeing blonde hair that immediately turns me off or makes me not connect. When people hear audio, they envision themselves versus a model that they cannot relate to based on what the model looks like."
The coupling of beauty brands with streaming platforms affords brands the opportunity to be associated with artists who have the same demographic as the brands' targeted consumer. Alison Bringé, chief marketing officer at Launchmetrics, has seen a version of this pairing play out in the fashion sphere, noting Calvin Klein's music video partnership with The XX and Drake debuting his song "Signs" at the Louis Vuitton spring 2018 show as examples.
“This is absolutely a trend we’re seeing," said Bringé, referring to fashion and beauty's shift toward music. "I know how clouded and saturated the market is for our customers, so brands have to be extra creative in their partnerships and think about how many times really they can show another product shot of a lipstick. These collaborations allow you to be more creative a brand new audience with the same demographics as the target audience you had, had you done it on your own platform.”
She added that Launchmetrics has analyzed fashion-music partnerships and found that in the cases of the best examples, the audiences served were nearly identical.
“Brands are thinking, my customer is no longer going to a brick-and-mortar store and they’re going to parties as well, but if I really want to reach more customers, I need to think what types of digital partnerships I can have," she said. "This is a really unique example of the marketing shift of what traditional sponsorship and partnerships and activations looked like — but for the digital era.”
More from WWD.com:
Twin-fluencers: The Latest Influencer Phenomenon
Huda Kattan’s Plan to Disrupt the Fragrance Industry
Source: Read Full Article