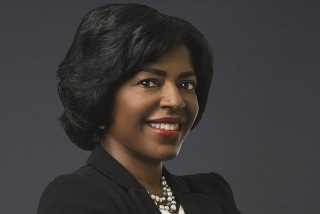 The Estée Lauder Cos. Inc. has appointed Deirdre Stanley executive vice president and general counsel, effective Oct. 28.
Stanley will jointly report to William Lauder, executive chairman, and Fabrizio Freda, president and chief executive officer. She will also be part of Lauder's executive leadership team.
In the role, Stanley will be responsible for Lauder's global legal organization. That means acting as a strategic adviser to the company's board and advising on strategy, reporting, compliance, risk mitigation, governance and "complex business transactions," according to a statement from Lauder.
Stanley succeeds Sara Moss, who in July moved into the role of vice chairman, and is now serving as a liaison between the Lauder family and the company's executive management team.
In her prior role, Stanley worked as general counsel for the Thomson Reuters Corp. for 17 years, where she worked her way up the ladder. She was also the company's chief legal officer, overseeing legal affairs and operations in more than 10 countries.
William Lauder praised Stanley's "leadership capabilities and sound judgment" in a statement. "Deirdre's exemplary track record of leading large organizations and acting as a key strategic partner to multiple ceo's and boards at a family-controlled, publicly traded company makes her uniquely suited to take on this role," Lauder said.
Freda noted that Stanley's career "demonstrates her effectiveness as both a world-class general counsel and a strategic business leader capable of managing a global organization while staying focused on long-term growth and transformation."
For more from WWD.com, see:
What to Watch: The Beauty M&A Slowdown
It Cosmetics Founder Jamie Kern Lima to Exit Business
Source: Read Full Article

High blood pressure: This ‘hidden’ obstacle could be stopping you lowering your reading
Health News