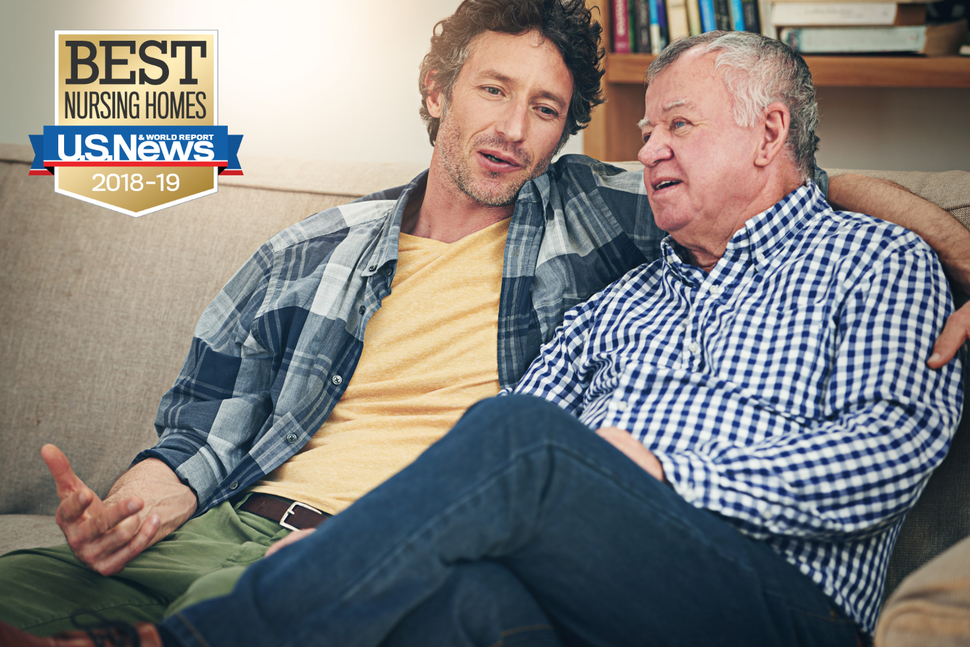 5 Strategies for Talking to an Aging Parent About Assisted Living

Start talking about the idea of moving your loved one into an assisted living facility before an emergency arises. (Getty Images)

A family crisis set the stage for Melissa Bovenkamp’s conversation with her elderly mother about the idea of moving into an assisted living facility.

Neal Tunison, Bovenkamp’s father, had been experiencing problems with his balance for months when he underwent successful back surgery in March 2005. Following the procedure, Neal, then in his late 70s, went into a series of rehabilitation centers. Something went wrong at one of the facilities, a snafu that undid the successful procedure, Bovenkamp says. Rather than recuperating and regaining his balance, Neal ended up confined to a wheelchair, unable to walk. Returning to the condominium where Neal had lived with his wife, Pauline, for 10 years wasn’t an option; the condo would’ve needed thousands of dollars worth of modifications to make it wheelchair accessible. Besides, Neal needed full-time skilled nursing care.

Bovenkamp got her father into the skilled nursing facility at Providence Mount St. Vincent in Seattle, where she and her parents lived. She was confident about the care her father would receive there, but she worried how her mother would fare without her longtime spouse. For more than five decades, Pauline had relied on Neal to drive her when she needed to run an errand, and he was also in charge of the household finances. Bovenkamp helped her mom as much as she could, but she couldn’t be with her all the time. It was time, Bovenkamp decided, to talk to her mom about the idea of moving out of her condo and into an assisted living community.

She knew the discussion would be emotional. Bovenkamp worried about how her mom, who was still mentally sharp, would react to the idea of losing a measure of independence. But the situation was dire, so she went with the direct approach. “I just had to be very realistic with her about her situation,” she says. “She doesn’t drive. I asked her, ‘Who would take you to the grocery store? To get your hair done? To see him?'” Bovenkamp says. “At that point, [assisted living] was kind of the only option.”

Fortunately for Bovenkamp, Providence Mount St. Vincent – also known as “The Mount” – also has an assisted living facility. It includes apartments of various sizes, a cafeteria and programs that encourage residents to socialize through different activities, like playing bingo and group exercise classes. If she moved into The Mount’s assisted living center, Bovenkamp explained to her mother, she couldn’t live with her husband again, but they could see each other every day. She could also socialize as much, or as little, as she wanted with people her own age. Pauline agreed to the move. Before Neal died in 2010, he and Pauline would meet daily in The Mount’s chapel. Neal would spend the day in Pauline’s apartment and share meals with her until it was time for him to go back to skilled nursing in the evening, Bovenkamp says. Though she was initially anxious about moving into assisted living, Pauline eventually adjusted, and today, at age 91, The Mount is her home and she enjoys being part of its community, Bovenkamp says.

How Should I Finance Assisted Living?

Bovenkamp says her father’s presence at The Mount made it easier for her to talk to her mom about moving into an assisted living facility. Most people who face the prospect of talking to an aging parent or other loved one about the idea, of course, won’t be in those specific circumstances. Some will be grappling with chronic conditions like depression, diabetes or heart disease. Some must maintain a regimen of prescription medication. “There isn’t a ‘one-size-fits-all’ approach to starting the conversation of moving into assisted living,” says Jennifer DiOrio, assisted living director at Glenmere at Cloverwood Senior Living, an assisted living facility in Rochester, New York. Glenmere is part of Friendly Senior Living, which has five facilities in New York state that offer a variety of senior community living options. Glenmere also offers enhanced assisted living, respite care and memory care. Cloverwood Senior Living, a separate independent living facility, is located in Pittsford, New York. “We are essentially asking people to live their private life in a public space. For someone who may have lived in their home for more than 60 years, this can be a very scary prospect. The best way to approach this conversation is with empathy, validation and love.”

While there’s no playbook for how to talk to a loved one about the idea of moving into an assisted living facility, experts recommend these five strategies:

Have the discussion as early as possible, preferably before a health crisis strikes. Having the conversation before a health emergency occurs can afford you and your loved one the opportunity to methodically discuss plans to tackle a host of issues, like downsizing and getting rid of extra possessions, figuring out finances and gathering medical records, says Rani E. Snyder, program director at The John A. Hartford Foundation. The foundation disburses grants to groups that work in the areas of supporting family caregiving and age-friendly health systems and that provide assistance for people facing serious illness and end-of-life issues. “Your loved one’s wishes will be respected if you have a plan in place,” Snyder says. If a medical emergency arises, whether it’s from a fall or from complications related to a chronic health problem, you or another family member may have to make a series of important medical and financial decisions. If those decisions are made relatively quickly in the middle of a crisis, they may or may not align with your loved one’s wishes.

Keep in mind the discussion may be a process, not an event. Your loved one may need multiple conversations to reach a decision, and that’s OK, given the stakes, Snyder says. “Most people prefer to age in place,” she says. “However, we can [and] should try to ease their transitions [from home to assisted living]. That may mean a series of conversations, not a single talk.”

The 10 Most Rapidly Aging States

Ruben Castaneda has worked at U.S. News since September 2016. Mr. Castaneda has written extensi…  Read moreRuben Castaneda has worked at U.S. News since September 2016. Mr. Castaneda has written extensively about Baby Boomer health and exercise habits, strategies for losing weight, health care issues affecting distressed communities, yoga and substance misuse. In 2018, the National Press Foundation chose Mr. Castaneda as one of 15 journalists nationwide to participate in a deep dive seminar into reporting on the opioids crisis. In 2017, the USC Center for Health Journalism named Mr. Castaneda one of 24 journalists chosen from around the nation to participate in the center’s National Fellowship. Mr. Castaneda was awarded a grant from the Dennis A. Hunt Health Journalism Fund. The grant helped support Mr. Castaneda’s reporting for a five-part series U.S. News published focusing on how the Trump administration’s immigration policies are affecting the health and well-being of children of immigrants, their parents and health care providers and teachers who work with the kids. He has appeared multiple times on “Just Ask David,” a podcast that covers health and beauty issues. Before joining U.S. News, Mr. Castaneda worked as a reporter for 22 years at The Washington Post, where he primarily covered crime in the District of Columbia and courts and police misconduct in Prince George’s County, Maryland. His 2014 nonfiction book, “S Street Rising: Crack, Murder and Redemption in D.C.” chronicles Mr. Castaneda’s struggle with crack addiction while covering the crime beat for the Post during the violent crack era. The Post named “S Street” one of 50 notable works of nonfiction published that year. Mr. Castaneda has also appeared on NPR, CNN’s “Reliable Sources” and on several local TV news shows . He has written for Politico, Washington City Paper, Los Angeles Weekly and Hispanic Magazine. Mr. Castaneda is a member of the Association of Health Care Journalists and the National Association of Hispanic Journalists. Mr. Castaneda graduated with a degree in journalism from the University of Southern California and completed a six-week fellowship at Duke University, part of a partnership with The Post. You can follow Mr. Castaneda on Twitter, and LinkedIn, or learn more about him on Wikipedia.

Teaching Kids How to Overcome Helplessness