Finding out your unborn baby’s sex is no longer the private moment it once was. In simpler times, your doctor would maybe make a joke about “hamburger or hot dog” on a sonogram or you’d just get a call from the office with your blood test results. But in the age of social media, epic sex-reveal (or “gender-reveal,” as they’re commonly and incorrectly called since we all know by now gender presentation is a social construct and is totally up to your kid, right?) celebrations are suddenly a thing. Yep, smoke bombs, filled doughnuts, confetti cannons, chalk-filled baseballs — all these implements are now par for the course when discovering what type of genitalia your future child is packing. At least these parties are good for photographs.

So if you’re an expecting overachiever, perhaps you’d like some inspiration for a truly, um, impressive baby sex-reveal shindig. Here are some options for going that extra mile, from a motorcycle surprise to a week of partying to a wild new hair color. Check out these extreme gender reveals — and copy them if you dare.

If you’re looking for a colorful way to reveal the sex of your little, powder is a popular choice. Small specks of pink and blue will get in your hair — and everywhere. And while this might make for some cute pics, it can also lead to some super amazing mishaps… like the recent incident when this expectant pops shot himself in the crotch. Ouch!

Los Angeles mom Sarah Bardo attended a doozy of a sex reveal for her Seattle-based friends. “We all met up in New Orleans and spent the week hanging out and exploring the city,” she says of the occasion. During the festive trip, the parents-to-be met their crew at a bar to find out the sex of their first child. “They opened a box, and a bunch of pink hats and boas and such came out,” says Bardo. “We put an ‘It’s a girl’ dollar bill on the wall in the bar, and then a band started playing.”

Yes, our jaws were on the floor at this point too. But wait, there’s more. “The band led the way, and we had a parade down Bourbon Street, throwing pink beads and dancing in the streets,” recalls Bardo. “It was epic.” Sorry, chill parents. That pink or blue Funfetti cake might be looking a little lackluster right about now.

Talk about taking one for the team. This dad-to-be was injured while learning the sex of his child. “I shot a paintball gun at my husband,” says Valley Village, California, mom Chelsea Ellington of their unique reveal. (The couple captured the painful event on video — check it out for yourself on YouTube.) A friend of the Ellingtons opened the envelope from the doctor containing the info about the baby’s sex; then, they put either blue or pink paintballs into the paintball gun. “I took the gun and opened fire on my husband,” reminisces the sharpshooting mom of one. Um, terrifying? Are they excited to tell their soon-to-be kid this? Also, are pregnant women even supposed to be around paintball guns?? “It was a lot of fun!” Ellington insists. “My husband had a couple of bruises, but we actually had the gun turned down pretty low, so it wasn’t as painful.” Not as painful. Reassuring.

If you want to go all-out and throw a luxe party, consider a sex reveal from Hilton Fort Lauderdale Beach Resort. The Florida hotel offers three ways to showcase the sex of your unborn child: tossing bath bombs into the pool turning it blue or pink; throwing darts at balloons filled with pink or blue paint; lighting the pool up blue or pink as the sex of the baby is announced. The resort lights up in pink or blue… and then the party starts! Options for your party package include beverages in pink or blue, a lunch buffet and “gender-inspired snacks” (um, please no) such as blue Terra chips, beet chips, dyed deviled eggs or frozen yogurt. Are you running for the hills? But just think of the Instagram posts!

One big mess on the beach

Blog Grey Likes Baby showcased stunning images from stationery designer Abby Hollar (of Consider the Lilies Paper) and her husband Julian Hollar’s Redondo Beach, California, reveal. The couple and 20 pals gathered on the beach dressed in white, closed their eyes and waited for the go to toss a whole lot of pink powder into the air. Some amazing photos resulted — it’s like a Pinterest dream. 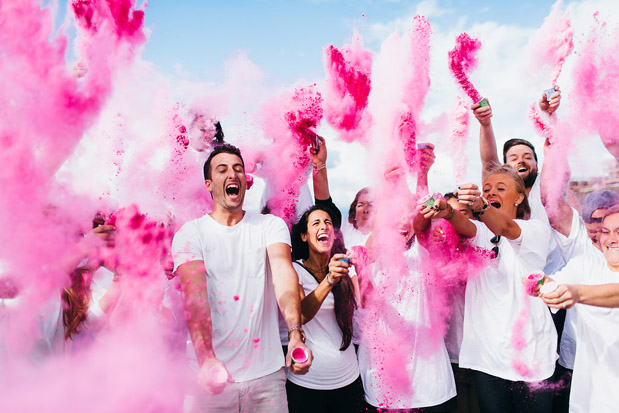 Rochelle Graham-Campbell (founder & CEO of Alikay Naturals) incorporated her husband’s love of motorcycles into their reveal, which has over 11,000 views on Instagram. (You can also view the video on YouTube.) Graham-Campbell, who is currently pregnant, stood with her son London while her husband revved a motorcycle — and a cloud of pink swirled around them. “Rochelle planned the whole thing in just a few days, researching the powder online,” says her publicist, Yvonne Leslie. “Rochelle loves the idea of gender reveals that have a wow factor and enjoyed all of the planning that went into bringing her fun vision to life.”

Valencia, California, mom Emily Carpenter wanted to get her hunter husband excited about their upcoming bundle of joy, so she painted a buck on some wood and had him shoot a compound bow at a balloon filled with paint to find out. Magenta paint splattered! “I was pretty sure that it was going to be a girl, but I know everyone was pretty surprised,” says Carpenter of the reveal. “Most of our wives’ tale checklist went towards boy.” 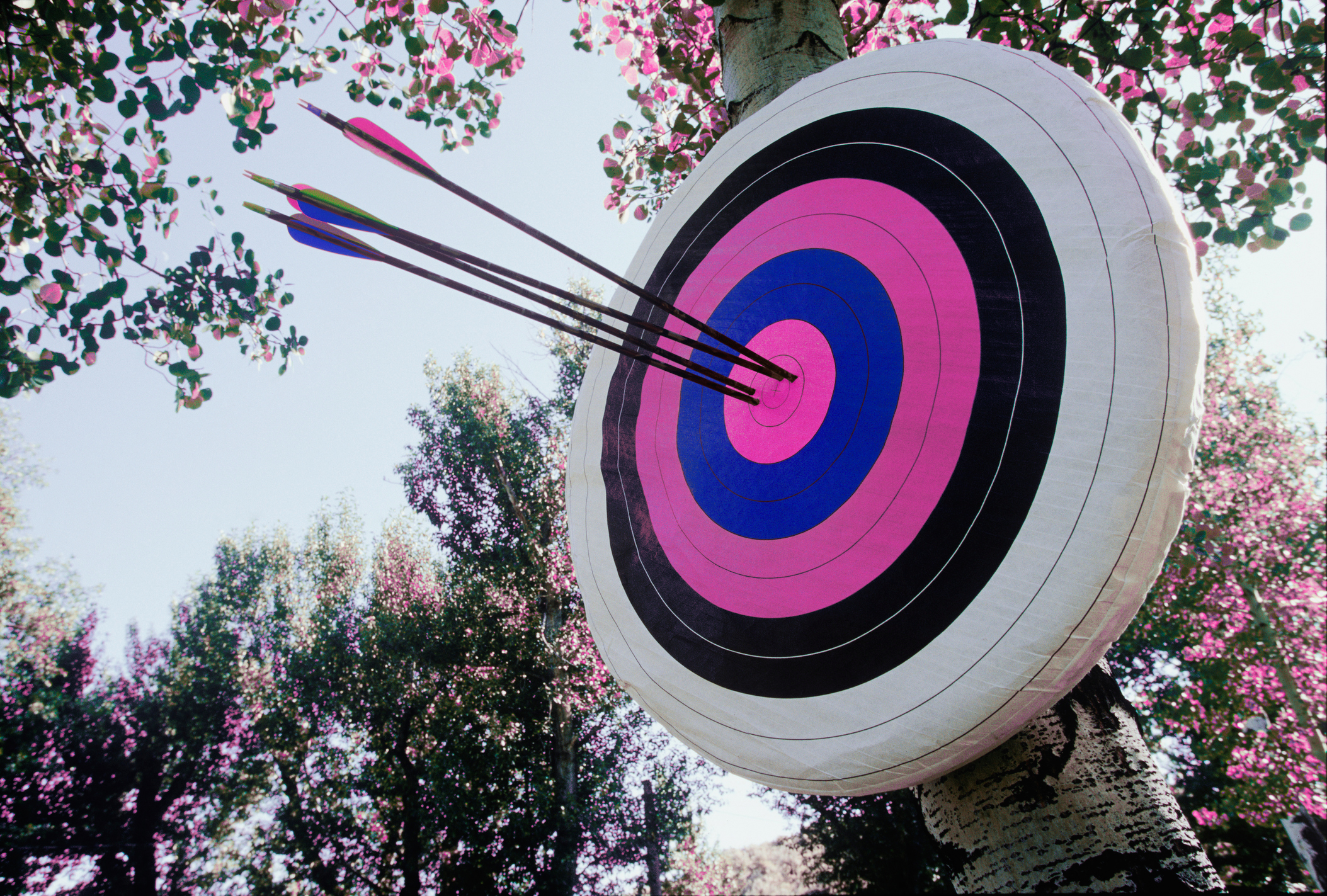 Amanda Parrish’s salon-set reveal went viral — for good reason. The expectant mom had Rapid City, South Dakota, hair stylist Amber Sacrison dye her hair pink or blue, and she’d only view the final reveal. And behold: Amanda found out her baby’s sex and her own new hair color all at once. That’s a lot to take in, but she was unfazed. “It was awesome. I loved being a part of something like that,” Sacrison told Today of the fun sex reveal, which was her idea. “To see their happiness was just amazing to me.” Currently Sacrison’s Facebook video has over 8.5 million views, so clearly it was amazing to others as well. Oh, and the new mom’s hair color? Royal blue, folks.

So there you have it. If you’re looking for ways to reveal your baby’s sex that are really out of the box, rest assured there is no shortage of weird, weird ways. Then again, you could always do it the old-fashioned way and find out the sex when the kid is born. Now that would be truly weird, wouldn’t it?